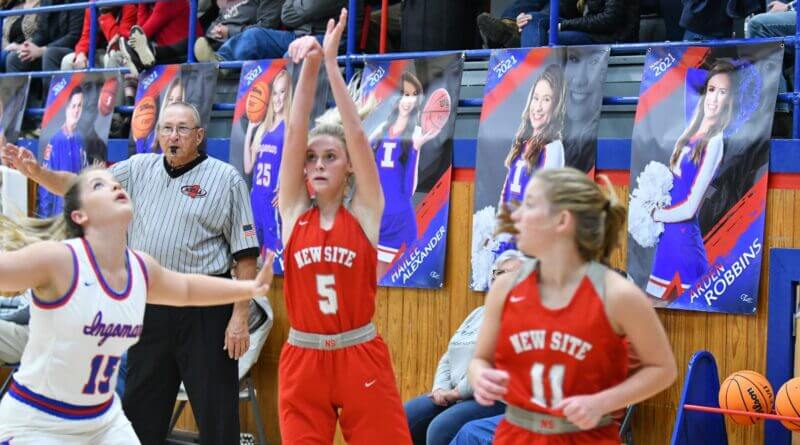 New Site and Ingomar came in to their Tuesday night matchup with a long history between the two and lofty statewide rankings in 2020.

The Lady Royals used full court defensive pressure for the entire contest to put the clamps on the Lady Falcons and come away with a 74-55 victory.

The offensive fireworks came early for both squads with the first four scores in the contest coming by way of the three pointer, one each for Ivy Loden and Hannah Campbell and a pair from Ingomar’s Katie Beth Hall and Kaylee Johnson.

Both teams had success from outside on the night, as the two teams combined for 15 three pointers.

After taking a Lily Whitley baskets closed out the first quarter, New Site was on top 19-15. The second quarter is where the defensive intensity of the Lady Royals starting playing a part.

New Site forced Ingomar into 5 turnovers in the second quarter and got 12 points in the quarter from Campbell, including a bucket just before the half ended, to take a 37-26 lead into the break.

The inside/outside game of New Site paired with their full court pressure continued to prove to be too much for the home team Lady Falcons on Tuesday.

New Site again forced Ingomar into five turnovers in the third quarter and got another solid performance from Lily and Hannah in the quarter.

Whitley and Campbell each put up 9 points in the third quarter to help the Lady Royals build a 57-41 advantage. The fourth quarter was mostly ball control for New Site as they coasted to the victory.

Campbell would lead with 29 while Whitley added 25 as the pair led the Lady Royals to a win over their long time rival.