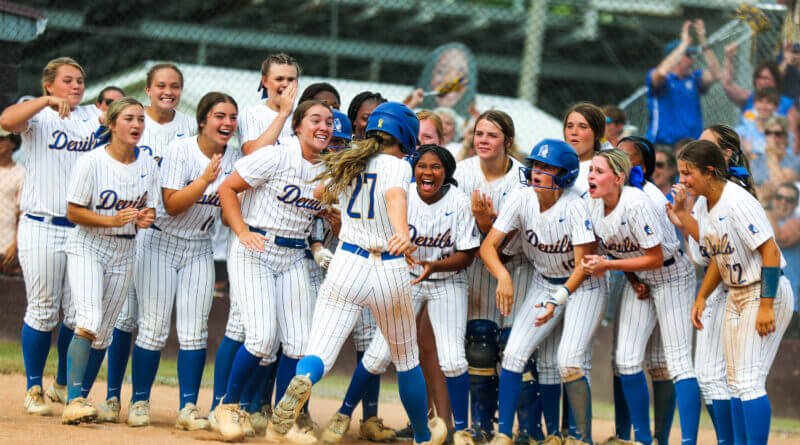 The game was on the line and the Lady Blue Devils needed a big hit.

Booneville had a problem, and shortstop Olivia Garrett had the solution.

The freshman shortstop connected on a 2-1 pitch with one out and one in the top of the 7th inning and blasted it over the left field wall for a 2-run homer. The shot broke a 2-2 and proved to be the winning run as the Lady Devils closed the door in the bottom half of the inning with Hallie Burns on the mound for a 4-2 victory.

Booneville is trying to go back to back in softball and cap a magical sports season that saw them win a pair of state titles in boys and girls basketball.

Burns and Garrett each had a pair of hits on the night. Maddix Lambert added a 3rd inning RBI sacrifice fly.

Booneville loads the bases with no out but only comes away with one run on this Maddix Lambert SAC fly. The lead Kossuth 2-0 headed bottom 3rd pic.twitter.com/RoMQieHyQ8

Amelia Nelson led off the contest with a single and later scored on a wild pitch to put the pressure on the Lady Aggies in the top of the first.

Kossuth tied the game on a single from Hadlee James that scored Ella Jobe.

As has been so often the case the last two seasons, Booneville responded and found a way to win.

Burns was terrific on the mound again, striking out 8 and allowing just 5 hits.

Garrett made the final out of the game to send the Lady Devils to Hattiesburg.

North half bound. Booneville gets the final out and defeats Kossuth 4-2. They will get a chance to defend their state title pic.twitter.com/V0wRPCa529