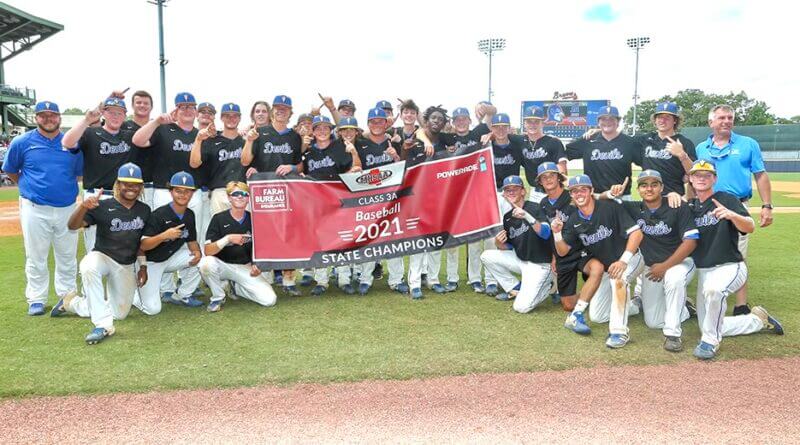 John Daniel Deaton got the Blue Devil offense going with an inside-the-park grand slam, and his squad never let up as Booneville knocked off the Magee Trojans 12-4 in game three of the 3A State Baseball Championship Series.

The Blue Devils opened the inning by loading the bases with no outs before Deaton cleared them with an inside-the-parker in the vast outfield of Trustmark Park.

Magee attempted to respond in the bottom of the first with an RBI single from Chandler Pittman, but it stopped there and held the score at 4-1.

Booneville continued to add on to the lead with sacrifice fly from Kyle Church and a wild pitch in the second to extend the lead, but Magee continued to battle in the bottom of the third with a Brennon McNair two-run homer to cut the deficit to 6-3.

Once again, the Blue Devils answered the call on the offensive end with a four-run fourth inning led by a two-RBI single by Bryce Lindsey to push it out to 10-3.

From there, Kade White relieved starter Ben Davis and only allowed one run in his three innings pitched.

With White shutting down any hopes the Magee offense had, the Blue Devils added a run in the sixth and seventh innings to bring the title back to Booneville with the 12-4 victory.

Hayden Donahue and Ben Sandlin led the way offensively for the Blue Devils with two hits each. Deaton led the team with four RBIs, which all came on his grand slam.