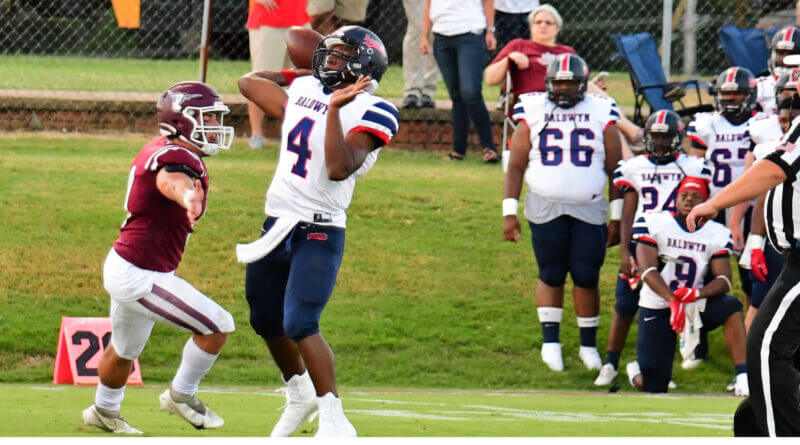 When Baldwyn and Kossuth square up and meet on the gridiron, you can typically expect hard nose football.

Friday night was no different, with the added bonus of a last second game winning field goal and a 12-11 Baldwyn win.

The Bearcats and Aggies traded blows all night, with the Aggies holding a 3-2 lead going in to the fourth quarter before late fireworks led to an exciting finish.

Baldwyn made a red zone stand in the second quarter and forced Kossuth to settle for a field goal, then a Kossuth miscue later in the quarter led to a Bearcat safety and a 3-2 halftime score, which held until the final frame.

But the fourth quarter had all of the action you could want.

Kossuth picked up a touchdown midway through the 4th quarter and an 11-2 lead. But on the next set of downs on 4th and 16 from the Bearcat 44, Jamuary Marshall found Hastin Nelson for a 56 yard touchdown that cut the lead to 12-9 with 4:04 to play.

The Baldwyn defense held and got the ball back with just over 2 minutes to play. The offense took over and marched to the 15 yard line before Wade Barron connected on a 32 yd field goal as time expired for the victory.

Coach Michael Gray picked up career win 94 as Bearcat head coach, moving him into a tie with Jimmy Dillinger for 2nd on the all-time wins list at Baldwyn