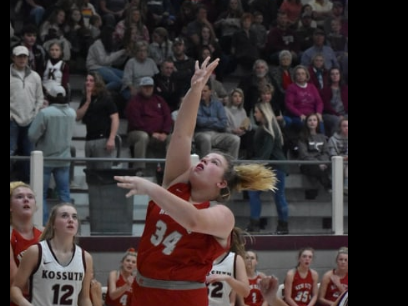 New Site and Kossuth met as two of the top teams in the area, both with undefeated records and championship aspirations this season.

The Kossuth court was like a basketball Thunderdome: two undefeated teams enter, and one teams leaves (undefeated.)

The Lady Royals, the Mississippi Sports Network #1 team in the state in 2A knocked off the Lady Aggies of Kossuth, the #1 3A team in the state and defending chapion, by a score of 52-48 on Tuesday to run their record to 9-0, tied for the 2nd best record in Mississippi.

New Site won the back and forth contest on the road after trailing 13-10 after the first quarter. A balanced scoring attack led them back into the contest and got them the impressive early season victory.

Hannah Campbell led with 17 points. Ivy Loden connected for 15 including a trio of crucial three pointers. Saydee Taylor and Lily Whitley each contributed 7.

In boys action, the Royals moved to 10-0 with a convincing 67-40 victory over the host Aggies.

The Lady Royals are in action Friday against Biloxi while the Royals take the court next against Saltillo.

See more game pictures from Tuesday’s contest from Larry Glidewell at this link.