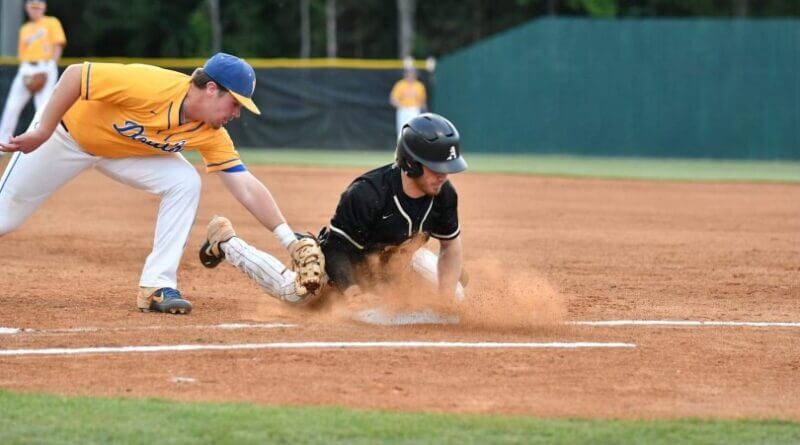 Wild plays defined Friday’s contest between Booneville and Amory as the Blue Devils defeated the Panthers 9-8 with a three-run seventh inning in game one of the 3A North Half championship series.

Amory struck first in the top of the first with two doubles from Hunter Jones and Bo Rock. However, Booneville quickly tied it up with a passed ball that scored Kyle Church.

The Blue Devils took their first lead in the second inning off of an error.

The game’s scoring came to a slight standstill, but Amory managed to tie the game in the fourth despite not getting a hit in the inning.

Gage Harrelson came up big for Booneville with a two-RBI single in the bottom of the fourth to get the lead right back at 4-2.

The Panthers fired right back in the fifth with a four-run inning. Reed Stanford and Ethan Kimbrough notched a single and triple, respectively, to help retake the lead.

The Blue Devils continued to show their resiliency with two runs in the bottom of the fifth to tie it back up. Church was a key factor with a double in the inning.

A throwing error and walk in the fifth and sixth innings, respectively, allowed the Panthers to take a 8-6 lead into the bottom of the seventh.

Just as they have all game, the Blue Devils battled back.

This set the stage for the tying and winning runs to come home, both on passed balls, to complete the comeback and give Booneville a 1-0 series lead.

Church accounted for half of the Blue Devils’ six hits with two doubles. Ben Davis added two and Harrelson added one hit.

Game two is scheduled for Saturday at Amory with first pitch at 7:00.